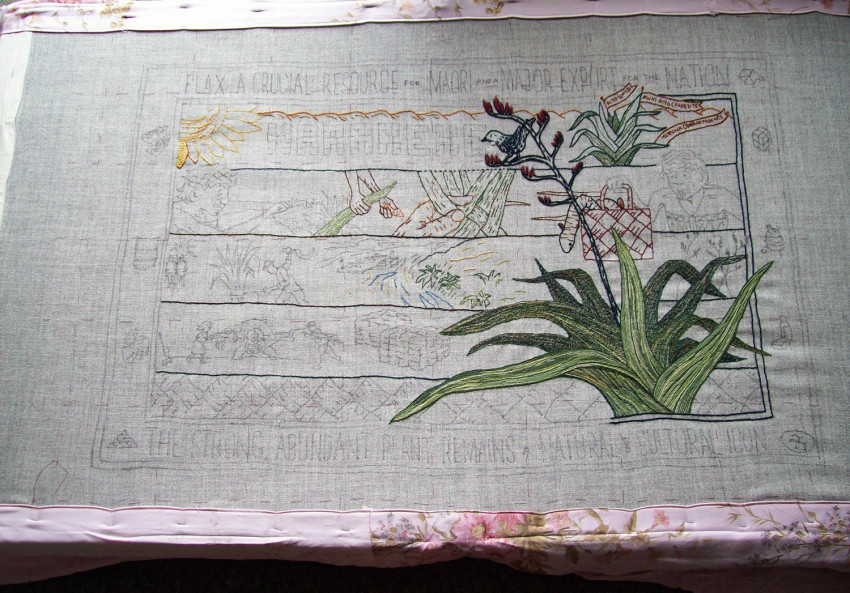 From the guild
Your eye is drawn towards the large flowering flax plant and tui to the right, then to the smaller detail of the cultivation, processing and use of the resource.  The flax industry was nationwide and an important part of New Zealand history. Embroidery Guild members began to stitch on the panel at our Regional Retreat at Eltham and it has since travelled to all Guilds, Regional Workdays and Exhibition Venues for further stitching.

The legend on the panel reads:
Flax, a crucial resource for Maori and a major export for the nation. The strong, abundant plant remains a natural and cultural icon.

The NZ flax plant is known for its strong leaves, distinctive appearance, flowers (popular with birds), and ability to grow in most kinds of environment. Maori discovered the medicinal and fabric-weaving potential of the plant, and it was used for shoes, clothing, bags and many other purposes.

Europeans arrived and needed rope for ships and various purposes. Flax helped unite Maori and Pakeha and create trade opportunities. Trading with Australia began in the 1820s. The flax trade had a powerful influence on how NZ developed – in terms of primary material and wealth, and also in terms conflict between and with Maori, as they traded flax for muskets.

Flax had various boom and bust moments since European contact. Flax-stripping machines changed how the plant was processed. By 1870 there were over 150 flax mills around the country. But despite machines, flax milling was hard work. New technologies and government support helped the industry continue until the 1980s.

In recent times, there has been renewed interest in and industry around flax for health products and new kinds of solid materials.